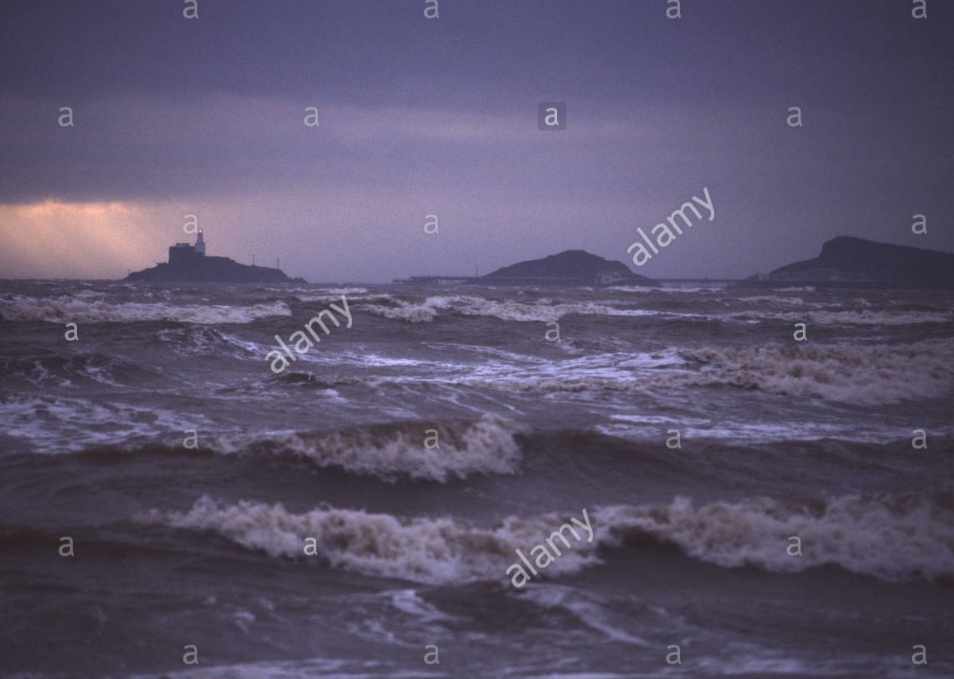 You left me on a stormy night in September 2018
9-11
loosing you will be as awfully memerable as the twin towers.
The windows looking out across Swansea bay.
A view that you loved.
The beach that you walked on many times painted toe nails and flip flops.
Drawing hearts in the sand with a stick.
Finding pictures in clouds
Paddling in the surf and throwing sticks for saffie then honey
Swansea pride in singleton park there across from the bay.
Singing to pink songs and drinking vodka cocktails.
I sit and wonder how many times we have walked there
How many sticks we have thrown.
How many coffees in take away cups
Sunsets we watched and dreams we shared
That bay holds so many memories.
The light house you loved I told you it was owned by housing association
You rang to ask if it was for rent.

It’s only right that this place you loved so much is part of today.
I have a silloette photo I took of you one summer evening standing looking at the sunset holding my granddaughter in your arms outside our favorite cafe remos.
Any excuse we would go there I’d buy us ice creams and you’d insist you didn’t like it
It’s the early hours of the morning and the stormy night intensifies.
Huge seagulls blow like paper towards the window the night is black and grey the rain comes down in sheets
A tiny glow from the light house blinks on the cliffs
Is the bay morning you leaving us too?
How many grains of sand on that beach . you often asked. As many as stars in the sky?
My random girl.
Every grain of sand and every star like every grain of me will miss you.

Twenty six hours earlier we had walked into that ward.

I’d squashed into the bed to

Hold you knowing we

Wouldn’t be leaving together

Twenty six hours later Im holding you knowing it’s the last time.
Whispering to you that its
okay to let go..
Telling you that I love you.

Your hair smelling of lush shampoo
Wet with my tears
We are surrounded by your family.
A sphere of love.

But as I feel your breathe rise and fall for the last time
I learn the meaning of heart break.
I have never felt so alone.
I promised I’d be strong.
Your faith in me was unshakable
I know your out there on the bay wind in your hair

But I don’t know how to live with out you

The sky is so non discript neither grey or blue like dishwater drizzeling from above
A red dirty Audi estate drives in front of me it’s brake lights the only brightness on this dull day.
Will today be the day you leave us?
I wasn’t even in the same part of the country when my own father died. I’d moved to Wales three years before we we’re estranged he was a bully and a alcoholic.
I don’t even know how or where he died. If anyone was with him
I drove back to my home town and was told in a very matter of fact way “Your old man died last night”
A pause
What?
Yes last night he died …
Another pause.
Nothing I felt nothing.
Relief maybe .
That I didn’t feel anything.
You Malcolm are the exact opposite of my Dad.
I’ve sat today listening to my hubby, your son chat to you about childhood memories you are completely non responsive but he carries on.
Stories of you and lou taking the sow to the boar. Rope tied around the back leg of a large pig , stearing it with a stick. Who knew that’s a done thing.
Down the road into the village past the pub and down the lane.
It’s starts out quite no problem until most of the dogs on in the village realise what’s happening and before you know it your like the pied piper. Pig, stick and thirty dogs following you. What a commotion!
Another story about going to fetch a Billy goat in the back of a small van.
Goat unimpressed about being transported and sticks it’s horns through the van roof so many memories.
I’m here dad he says.
He looks at me and says I came home from work because I had that feeling.
Someone was standing behind me.
He was waiting for me to come home. So I came.
Keep talking I tell him he knows your here.
My heart swells with love for him my grafter of a man.
Everything about him so like you Malcolm you taught him well.
I wish we had know each other longer I’m sure you had hundreds of more stories to tell me.
See you later Dad Lou will be here later to go fetch the m. Jeff’s says kissing you gently.
We leave to drive home in separate cars.
Dreary drizzles clouds the view from the back door over the bay.
“I watched the pier burn from this step, over at Weston super mare I here you say. On a clear day you can see ilfracombe
Your voice as clear as day Malcolm.
I know I whisper only last summer you were up there on the flat roof fixing the gutter with Jeff.
How will he live with out you I wonder ?
I’ll take care of your lad I promise.
Now go fetch the pig home xx 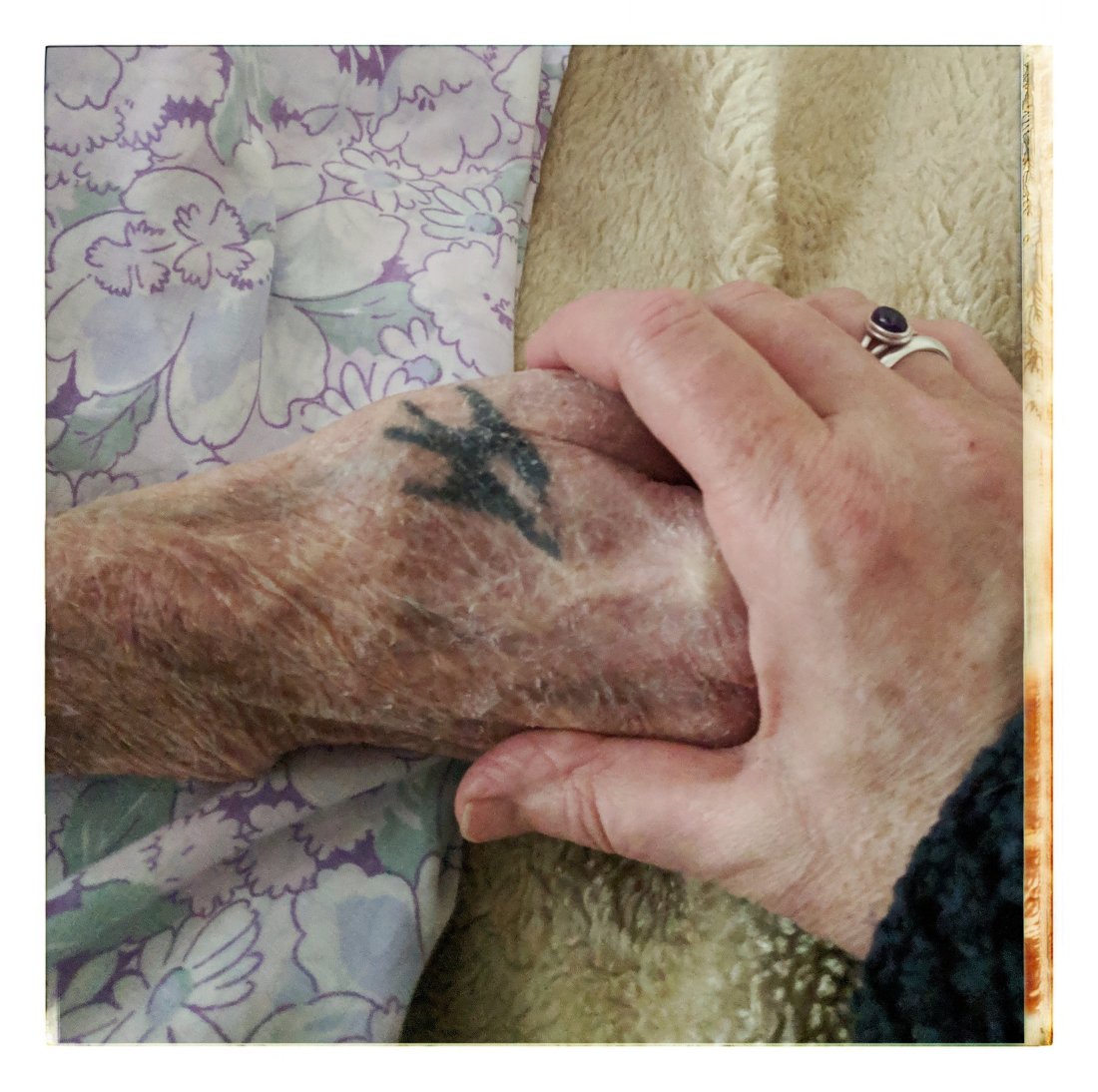 Today another beautiful day spent with Stephanie Jones at the malindi centre in West Wales.

I met Stephanie when I did my Omni energy healing a system of healing from India founded by Dr Sameer Kale I have thought how best to describe it’s differences to Reiki which I have worked with and taught since 1992.

The similarities end there.

If you have been a recipient of Reiki please think about experiencing Omni and see for yourself completely different.

A very solid grounding healing all encompassing I’m really enjoying using on myself and as a distance healing.

Looking forward to using it on others.

It seemed to draw me although I was a little curious how massage would work clothed?

As kria can be used either way.

So I booked and went back today to learn more!

In a nutshell I’m hooked.

This is amazing having experienced a massage myself by Stephanie my Omni Teacher/Master I have nothing to compare this to. It left me feeling totally relaxed, energized and refreshed.

Then my turn to give a kria massage I was pleasantly surprised how easy it was to do this whilst the client is wearing clothing covered with a light cotton blanket.

The heat and energy from the healing was palpable.

I know this is going to be a valuable tool in my holistic tool box. Particularly with pallative patients kria is something that is easy to do even in a hospital bed.

I’m thankful I was drawn to this loving path of Omni. I’m sure my journey with Stephanie Sameer and malindi centre is just beginning.

My new website will be launching this month please check us out any profits go to providing breaks for cancer patients at Ravens Retreat. Wales.

The healing room run by my dear friend Julie Rosser in the vale of Glamorgan also provides Reiki classes and a range of therapies there is also a beautiful yurt available to hire for workshops.

Training for Omni can be found here 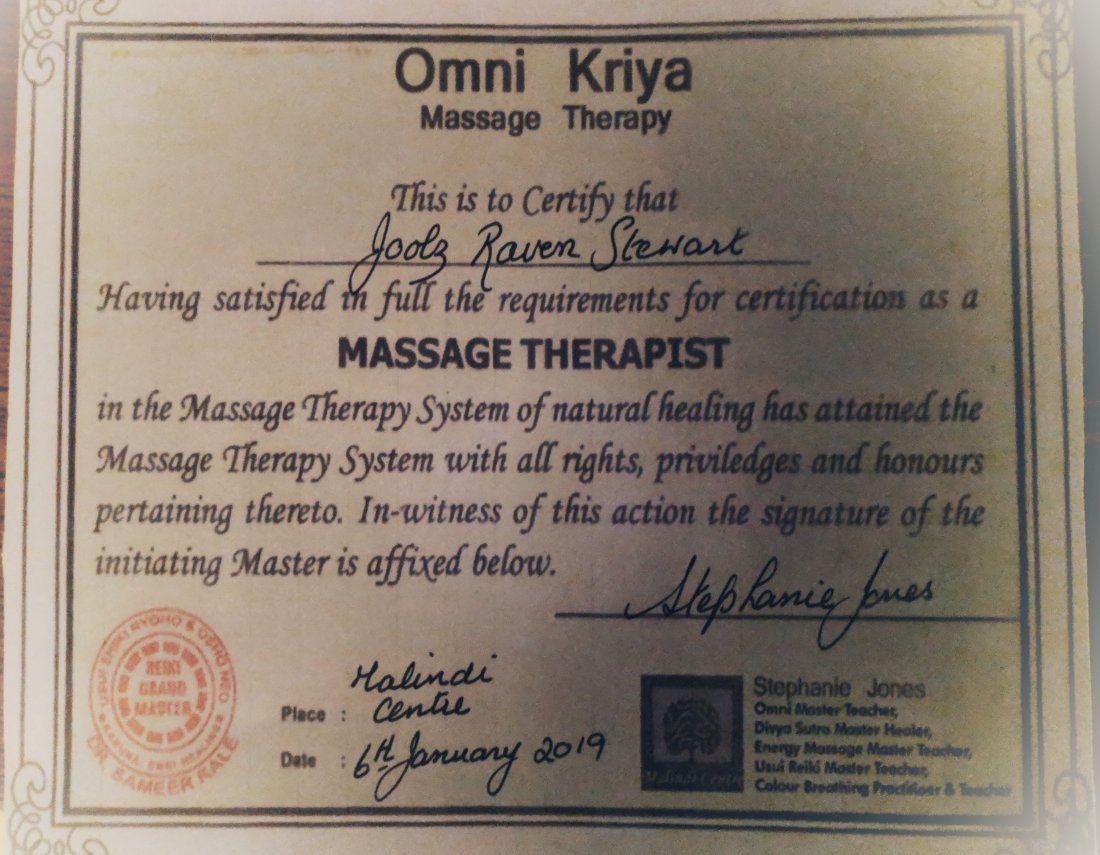 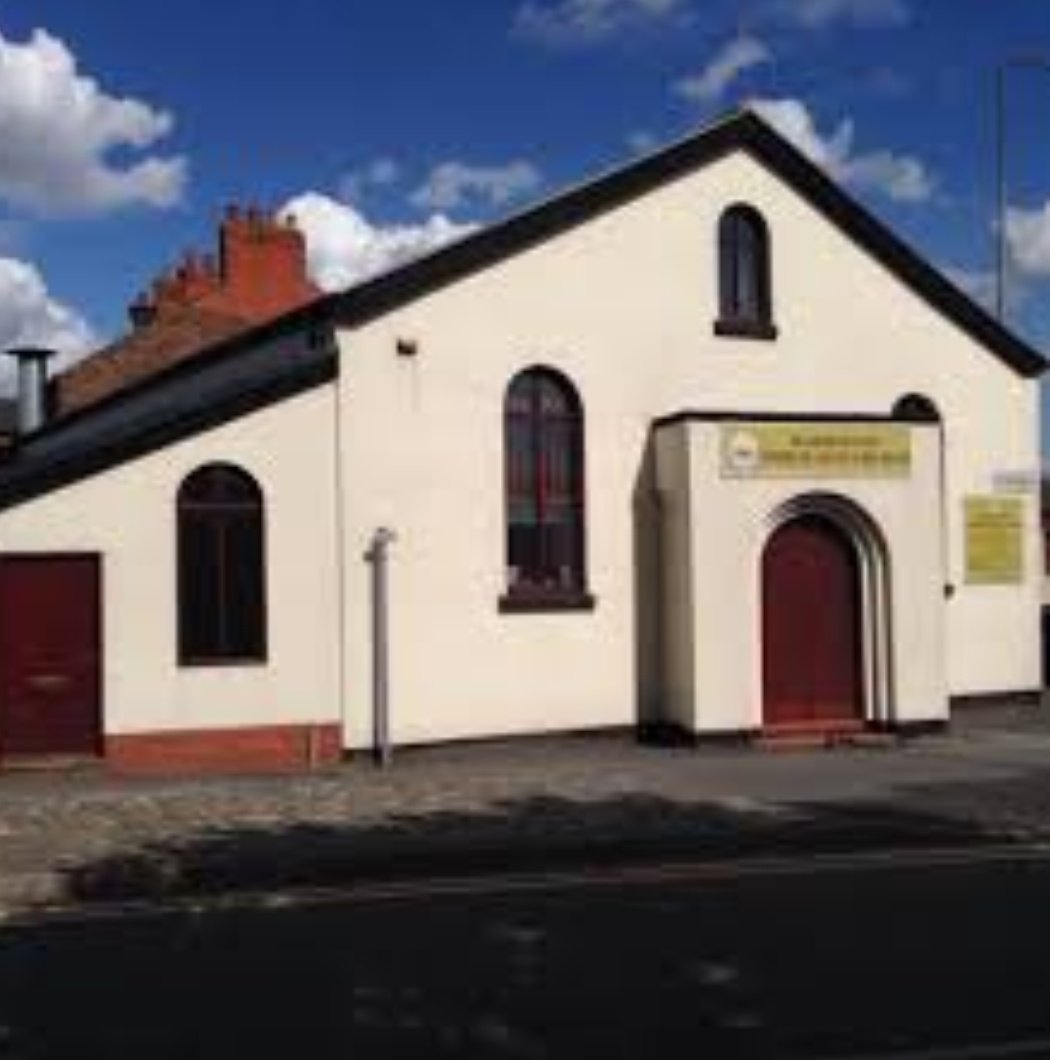 Trying to explain my own understanding of the spirit world to someone else. A hard task

My belief that it really does exist here where we are now. Just a different vibration. Like radio channels.

Communication with spirit is like fine tuning a radio to the channel you want.

Spirit do the hard work we open up and invite them

No it’s not faith it’s a definite. I know without doubt. I suppose so much so that I have never really contemplated not ‘knowing’.

Although I didn’t have the best childhood I had the best Grand mother.

I can trace my acceptance and knowing, seeing, spirit to her. If you’ve always known something it’s normal I guess.

Well normal to you anyway

Death was never something to be feared.

Although religion was part of it for my Nan and my Mam both active spiritualists I went because they went, not because I wanted to. Thursday clairvoyance and divine service and healing on a Sunday. Charles Street spiritualist church a tiny church compared to some the organ a gift from sir Thomas beacham covered one wall.

The church stood at the top of a street of terraced houses in St Helens. The house next door ajoined after service it was used for healing and gathering of anyone needing a chat over tea and Buscuits or shelter from the cold northern weather until the bus arrived. Visiting mediums no pomp or robes just the same as you or I, mam or Nan

People died services would be a life celebration in the small packed out church. I carried my Mam’s coffin in there 1997 a warm.day in May.

My children beside me.

Although I missed her physical presence her car boot sale finds watching the soaps with her I knew she was okay and life went on.

Her empty seat beside her best friend Dot in church wAs the saddest part they were like sisters and I remember wondering why Dot was so upset now that Mam was on the spirit plane?

It was another vibration but here around us I knew she was still about .

I had three young children to keep me busy a single mom with a barbers shop to run.

I moved away my belief was never dependant on a church I still worked with healing, tarot followed the moon and found my own way.

If I ever went back to my hometown or to Southport I’d attend church it seemed to have shrunk but it’s seats remained full.

I lost more relatives and good friends they say as you get older you attend more funerals than weddings. How true that is.

I work as as soulmidwife and funeral Celebrant so that’s a given.

I can honestly say I accept and respect other religions whatever gets us through.

But as I started by saying I’ve never had to explain my unwavering belief.

My daughter in law to be. Mother of my grand daughter has recently lost her mother.

My best friend and she is desperate for ‘evidence of spirit.

Now I’ve had conversations about what I believe before.

Received messages during a healing but this is so different.

I’ve known her since she was 13 she wouldn’t mind me saying she was a bit of a wild child. I loved her from the day we met.

No interest in anything spiritual.

Her mother and her were so close .

I know too much to give a reading.

And oddly or not this is the first death I’ve struggled with.

I miss her too beyond words could describe. So now as I remember Mam’s best friend Dots tears as she sat beside Mam’s empty seat in church.

My daughter in law is the age I was when I lost my mother.

Maybe things were different because although Mam and me were very different people we both held the same belief?

She died in tragic circumstances but I remember thinking she would rather be where she now is.

It’s a fragile thing life I think.the only answers I have are to be the best that we can in the time that we have.

She rang me my daughter in law last night to share memories of her mother.

So I think.its that concept of ‘time’

Spirit don’t have it.. ‘time’ that is.. only we do on this earthly plane..

They are here they never left.

Just as my grand mother promised.

I needed you Donna to remind me and show your daughter the way.